Autostereograms or Random Dot Stereograms are 2D images propagated by Magic Eye Inc. in the 90s’. For a short while, autostereograms could be seen almost everywhere – from posters and books, through games, to TV shows. But is there anything unique in those images? The answer can be obvious for some and frustrating for others. The Magic Eye images at first glance are just random colourful pattern, but if you spend enough time to learn how to look at them correctly, you will see the real magic! In each picture, there is a hidden 3D image, which can be seen only when you relax your eyes. Learning how to see the hidden 3D images takes a lot of time, patience, and practice (although some people can see it faster than others), but once you see you cannot confuse it with anything else! For me, it looked like real magic!
To learn a bit more about viewing techniques, please visit “Autostereogram: viewing techniques” page. 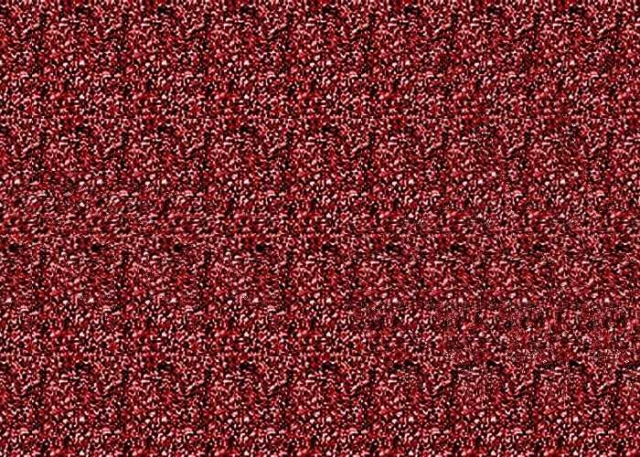 The history of stereoscopic cinema is a vast and difficult topic to tackle, many researchers studying the history of cinematography debate on the very first attempt to create a three-dimensional illusion, on a two-dimensional (flat) image or screen. However, the very first known attempt to describe the 3D vision was made the 3rd century BC when Euclid of Alexandria declared that “to see in 3D is to receive by each eye two dissimilar images of the same object”. (Journal of The Optical Society of America, 1945) Throughout the centuries many artists, philosophers, and scientists explored the question of 3D vision and gradually the concept has started to clarify. In the XVI century, a Florentine artist and painter Jacopo Chimenti, drew two separate images of the same subject with slight iterations – one seen by the left and one by the right eye. By viewing the image with a special device, which separates each eye and shows a different image for each one, or simply diverging the eyes, one can see a semi-3D version of the drawing. This piece of art has become the very first known “stereo pair” or the very first attempt to recreate the mechanisms our eyes use to perceive three dimensions. (Sebe and Lew, n.d., 144-150) However, some researchers claim that the effect was not intentional and Chimenti was simply dissatisfied with his initial drawing and decided to repeat it. (von Helmholtz, 1962) Either way, due to the artist’s accident or incredible insight, the phenomenon inspired more artists and scientists to follow this path in creating stereoscopic imagery. Three hundred years later, in 1838, English inventor Sir Charles Wheatstone described the phenomenon known as “stereopsis”, which can be understood as the set of principles attributed to binocular vision and responsible for the perception of depth. One of Wheatstone’s findings explains that when analysing the distance between objects close to the eyes “a different perspective projection of it is seen by each eye, and these perspectives are more dissimilar as the convergence of the optic axes becomes greater”. (Wheatstone, 1838, 371) This work gained Wheatstone recognition amongst the scientists, however, it was not until 1839 when Louis Daguerre made stereoscopy available for the masses with his invention of “daguerreotype”. The device was used to split the sight into two channels, each channel would only see one image from the “stereo pair”, which created the illusion of depth. (Tricart, 2017) It is worth noting, that in the XIX century painting was still the norm of representing the reality, the introduction of photography and stereoscopy has brought new solutions and sensations to the world of visual representation. In the late XIX century, after the first film projection, a group of scientists kept working on the 3D cameras and projectors but with no avail. The issue was not as much in the filming as in the projection itself. In 1902 French inventor Charles-Émile Reynaud develops so-called “stereo theatre”, which allowed to project films in three dimensions, however, the invention did not gain a foothold. A decade later William E. Waddell and Edwin S. Porter organised the first 3D public screening, and in 1922 Harry K. Fairall created the very first narrative movie The Power of Love, which set a milestone in the stereoscopic cinematography. (Tricart, 2017) The technology has been developed throughout decades, but in the 1950s’ the stereoscopy lost its popularity and hence the golden age of 3D has come to an end. This could be due to two factors, the poor quality of the screening, which resulted in the audience experiencing headaches and confusion, and the lack of evolution. Compared to the vast development in regular cinematography and special effects, the stereoscopy seemed to stay in place, artists could not offer the audiences anything more thrilling. However, with the coming of the new digital era, filmmakers have found new better ways of creating and screening 3D imagery. In the late XX century, a variety of stereoscopic toys were produced, which allowed children to experiment and explore the secrets of 3D vision. Multiple studies have been made on the principles of 3D filmmaking and methods of optimising projections to ensure comfortable viewing experience for the audiences. This has led to the resurrection of 3D movies and the production of Avatar (Cameron, 2009) or Coraline (Selick, 2009), and finally to the 3D that can be seen today. (Tricart, 2017)

The aforementioned techniques of creating the illusion of depth rely heavily on viewing devices, such as daguerreotypes or 3D glasses. But audiences were still waiting for easier ways of viewing three dimensions in films or images. This need has urged scientists to explore new possibilities. And the best way to start transpired to be coming back to the very beginnings of human kind’s interest in optical illusions. One of the scientists and psychologists studying binocular vision was Dr Bela Julesz, whose work dedicated to 3D vision still inspires filmmakers and psychologists. Julesz has decided to review the knowledge gathered throughout the centuries by various scientists, filmmakers, and inventors and develop the technique people seem to have forgotten about – the wallpaper illusion. The wallpaper phenomenon was first observed by Sir David Brewster in 1844, but it did not seem to attract the attention of filmmakers or scientists at the time. Sir Brewster has noticed that when looking at a flat wall covered with a wallpaper that has the same geometric pattern repeated horizontally, one can converge the eyes to see the pattern float in front of the actual wall or diverge the eyes to see the pattern as if it was behind the wall. Another observation was made on the number of repeated patterns, namely, there would always be an additional horizontal wallpaper appearing in the exact centre of the wall – the same phenomenon was discovered in the XVI century by Chimenti. (Brewster, 1844) Julesz’ work provides us with the insight of stereographic perception and clearly shows that the ability to perceive depth is owed to the brain, which can calculate the depth information without the need for the eyes to receive any evidence of perspective or distance. (McCormick, 2011) The fact that the interspace comprehension is the merit of the brain is reassuring, as it allows tricking it. Whereas the eye is a muscle and it follows strict rules of physics, the brain requires precise information to work correctly. If the brain receives one incorrect variable it tries to interpolate or extrapolate based on the given data, which often means that its calculations can simply be wrong. These paradigms allowed Julesz to develop random dot autostereograms, which as opposed to stereograms allow the audience to see 3D space on a flat 2D image without the need of using additional apparatus. (Julesz, 1962) One simply needs to diverge (relax) the eyes or converge (cross) the eyes to see the hidden image. The autostereograms are combined of two channels – the instantly visible pattern and the 3D hidden image.
Julesz’ work derived from the XIX century study on binocular vision, as well as XVII century stereo pairs and even the Palaeolithic optical illusions, it has also inspired companies, such as ©Magic Eye Inc. to develop tools for creating the effect and sell stereographic books for customers’ entertainment, but more interestingly it created other scholars an opportunity to explore the psychological impact of these images on people with special needs, such as Attention Deficit Disorder (ADD) or even anxiety. (Pepin, 2003) 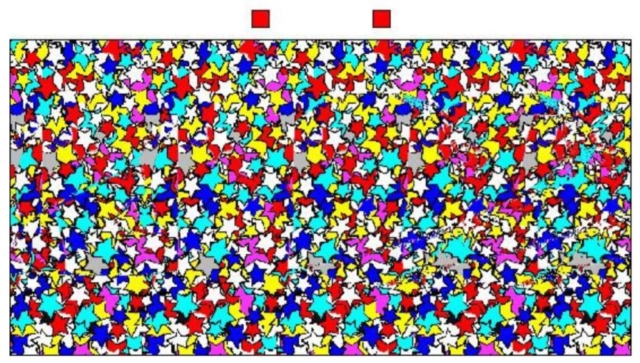